“You knew, still you did nothing!” Focus Features has revealed the first official trailer for Dark Waters, a legal thriller from acclaimed filmmaker Todd Haynes (I’m Not There, Carol, Wonderstruck). This film was scheduled very late in the year for release in November, and hasn’t played at any film festivals yet. It seems to be a very timely, important film about the environment and how it’s being destroyed by corporations and it’s rigged in their favor. Based on a true story, Dark Waters follows a corporate defense attorney who takes on an environmental lawsuit against a chemical company (DuPont) that exposes a history of pollution. Starring Mark Ruffalo, Anne Hathaway, Tim Robbins, Bill Camp, Victor Garber, Bill Pullman, William Jackson Harper, and Mare Winningham. Looks damn good, telling the truth for us to hear. 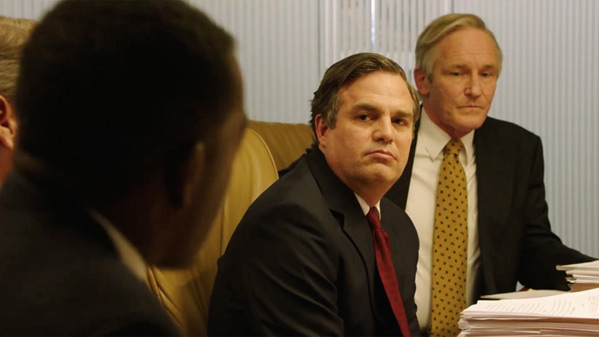 Inspired by a shocking true story, a tenacious attorney (Ruffalo) uncovers a dark secret that connects a growing number of unexplained deaths due to one of the world’s largest corporations. In the process, he risks everything – his future, his family, and his own life – to expose the truth. Dark Waters is directed by American filmmaker Todd Haynes, director of the films Poison, Safe, Velvet Goldmine, Far from Heaven, I’m Not There, Carol, and Wonderstruck previously. The screenplay is written by Mario Correa, based on an article by journalist Nathaniel Rich. This hasn’t premiered at any major film festivals yet. Focus Features will debut Haynes’ Dark Waters in select theaters starting November 22nd late this fall. Who’s interested?

Conor Devine – the Ironman with MS