—email—
My secret popped up today after sending it in forever ago. I cried so hard. 4 years later, I am still clean, my father and I now co-own a business together! My life is better than I ever thought it could be. And though I know I had to get better for myself first, my dad never gave up on me. He cried, he got angry, but he never ever gave up. I know how lucky I am to survive this opiate crisis. I also know how lucky I am to have parents like mine. I would’ve never made it without them. My dad tells me he’s proud of me all the time

Thank you for posting my secret that has written and driven my story for the last four years. I am beyond grateful. And if anyone is struggling, be patient and kind and loving with yourself. It does get better.

—email—
Hi Frank. I have been a fan of Postsecret since soon after you started the project, and as a teenager I would send secrets in regularly, though I never saw any of mine posted. I’ve kept up with the project since then, but don’t check the site religiously every Sunday anymore. Well, imagine my surprise when I happened to scroll through the Father’s Day secrets and saw my own, one I had made as a teenager, at least 10+ years ago. It is the one of the baby on the man’s shoulders and it says “Dad, why did everything have to change?” My dad and I had an extremely strained relationship for the entirety of my teens and early twenties, and now that I am 29 we are just now starting to mend it and have a relationship again.

Yesterday was the first Father’s Day I have gone out of my way to text him, buy him a gift, pick out a card, and try and show him how much I appreciate everything he’s done for me and how thankful I am for our current relationship. Seeing a secret I sent in so long ago when things were so strained between us was like a kick in the gut. It made me even more thankful for how far we’ve come, and although we still have a ways to go, things are finally starting to get back to the way they were when I was a little kid. So thank you for posting my secret and reminding me of how far we’ve come.

I’ve been following PostSecret now for over a decade and this is my first e-mail to you.

I’m writing in response to the fourth secret on the page – the one that says the dad wasn’t a good man to his son when he was young, but that he’s trying to do better now and it’s hard. I wanted to let him know that he shouldn’t stop trying to find ways to connect.  Please be patient and please don’t stop trying. The nature of any relationship is built on much more complex circumstances than can be realized without time, effort, understanding, and forgiveness. Your son needs time to work through his experiences and feelings too, and hopefully he’ll get there (and maybe he won’t). Either way, don’t stop showing up in all the little and big ways.

Oddly, I discovered PostSecret when my dad and I were asked to do voice-overs for one of the promo videos for the “A Lifetime of Secrets” book release. The secret he read was about fatherhood. Mine was about fate. Years later, when I went to visit the PostSecret exhibit at the National Postal Museum, the secrets we read were displayed right next to each other. I started crying right in the middle of the museum. I’ve attached them to this e-mail. Truly, it’s all in the little things. If you can’t read them the first ones says, “If you’re waiting for a sign. . . this is it. Do it. It will be amazing. The other postcard read, “I LOVE HER ANYWAYS” and on the other side was a black and white sonogram with the words, “I know she’s not mine.” 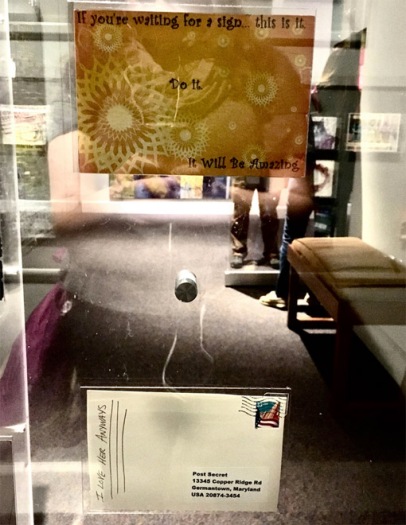 My wife says sex makes her feel violated, but she won’t talk about it

My wife says sex makes her feel violated, but she won’t talk about it