Why I Broke My Vow to Never Join a CSA Again

My husband refuses to talk about the CSA of 2009. It left him unable to face kale or cabbage—he still gives beets the side eye. We were CSA novices, and our ignorance was boundless. These are the lessons we took away from the experience:

Since we are people who learn from our mistakes, we decided the best way to handle this was to accept the message the universe was clearly sending us: Don’t join a CSA.

We stayed with it until about a month ago, when seeing my friend Laura’s pictures of her most recent delivery finally got the better of me. It looked fantastic, so I figured it must be ruinously expensive. Secretly, I’d been investigating CSA options for a while, but the price tag ended the inquiry every time. Not this time—the price was entirely manageable. So, what was the catch?

You know the Island of Misfit Toys? This was delivery from the Island of Misfit Produce. The company that Laura buys from sells the produce that stores reject produce as too small, too blemished, too whatever. “Rescued” might not sound like a selling point, but it was for me. Food waste is a big challenge for us, especially produce, which seems to enter our house with the sole purpose of withering and rotting.

I’ve gotten better at spotting when bananas are about to give up and collapse into disgusting goo, but for every bunch I use for banana bread, there’s a head of lettuce or a cucumber that turned moldy, or a forgotten knob of ginger that fossilized in the back of the drawer.

It’s a waste of money and a waste of sustenance—and it’s not just my family’s problem. The USDA estimated that, in 2010, 133 billion pounds and $161 billion worth of food went to waste. That’s about 30 percent of the food supply, affecting availability for those in need and creating landfill and consequent environmental impact for everyone.

I felt noble “saving” unloved produce, but I was still plagued with doubt. Food waste isn’t any better if it’s on me rather than the grocery store, and uneaten carrots are uneaten carrots. What if we didn’t like what they sent? What if my kids refused to eat any of it and I felt obligated to consume an entire box of artichokes and bok choy? What if I don’t even know what the hell to do with artichokes and bok choy? 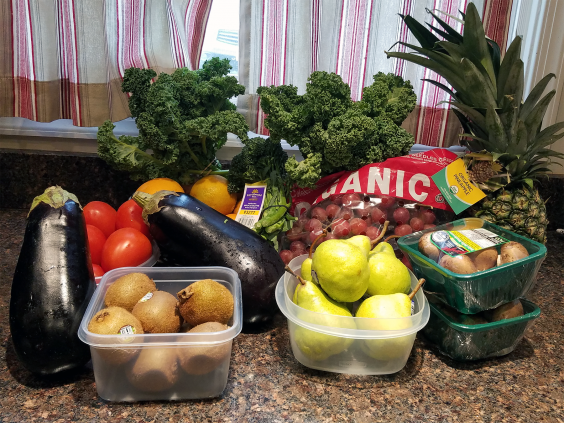 It turned out my fears were, as usual, completely unfounded. Our first delivery was zucchini, cucumbers, cherry tomatoes, pears, apples, potatoes, carrots, and broccoli. And despite my expectations of produce only its mother could love—there weren’t even any visible defects. The only difference I’ve noticed is that just like when I buy from the farmer’s market, it tends to soften faster—that’s not great for us, but the taste is so much better, there hasn’t been much left over to spoil. Here’s what happened:

I’ll be honest: I am a competitive person and I will throw down for a challenge. OK, I pretty much can’t resist throwing down for a challenge. I was up against a checkered past with CSAs in general and our family’s unmagical Rumplestiltskin ability to turn vegetables into trash. I wanted to prove that this could work for us. I was determined.

It was grim determination, though. I certainly didn’t foresee any pleasure. And yet, what we’re getting is delicious—better than what I’d been buying at the store. The cucumbers last week were so sweet and crisp, we ate them right out of the bag, and a fair number of the cherry tomatoes went directly into my mouth instead of the salad.

So, the fruit disappears first, but we’re all eating way more produce, and the waste has been far less. Full disclosure: I’ve thrown away two carrots and an apple. I was sad to do it, but it’s progress. My menu planning has become more diverse, based on what the delivery includes, and the creativity is an unexpected benefit. I might not have tried including broccolini with oranges before, but it’s pretty good. My kids have rediscovered a love of cucumbers and asked me when we’ll get fennel in the delivery. Fennel? Uh, OK. Fennel. Why not?

Dialing Down the Grim Reaper Gene

The Best Source of Resistant Starch

The Best Source of Resistant Starch